Ellen has big surprise for McDonald's pranksters from Pearland

The clever UH students who put up a fake marketing poster of themselves in McDonald's got their own surprise Monday on "Ellen." 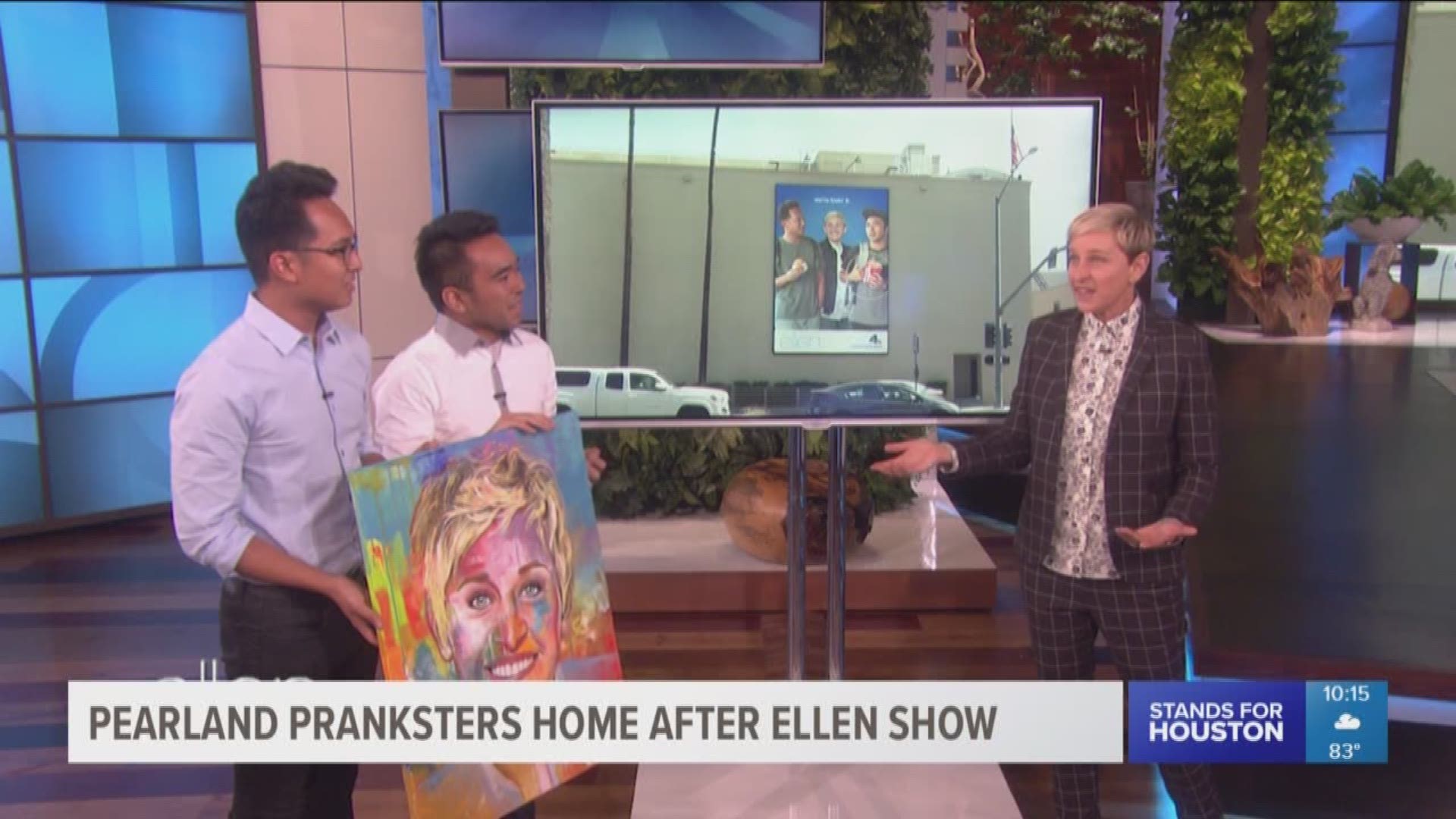 PEARLAND, Texas -- The buddies who pulled off an epic prank at a Pearland McDonald's shared their story with "Ellen" Monday.

Jevh Maravilla and Christian Toledo made national headlines after KHOU 11 first reported on the prank in early September.

They put up a fake marketing poster of themselves in the fast-food restaurant back in July and no one noticed.

Ellen heard about the sneaky students and invited them to be on her show.

These kids put up a poster of themselves in a McDonald’s, and nobody noticed for months. But I noticed. https://t.co/WAscG3bF0b

She surprised Maravilla and Toledo with $25,000 each, courtesy of McDonalds, to be in their upcoming marketing campaign as part of their commitment to diversity.

The guys were speechless when Ellen told them the news.

She also gave them a painting of herself to sneak into McDonalds in the future.

Credit: Homer, Michelle
The clever UH students who put up a fake marketing poster of themselves in McDonald's got their own surprise Monday on "Ellen." (The Ellen Show)

This also started back in July when Maravilla and Toledo noticed something missing at their favorite fast-food spot.

“We were eating McDonald’s one day and we looked around and saw there were posters around that didn’t have any Asians,” explained Jevh Maravilla. “They had other races but no Asians so we felt like it was our duty to put ourselves up there.”

The pair cooked up a plan: They took a picture of themselves holding a McDonald's burger and fries, then added the logo and other features to make the it look like the posters hung around the restaurant.

After their giant poster of the photo arrived, Maravilla found an old McDonald’s shirt at Goodwill for $7.

On July 13, with the help of some other friends, the duo snuck the poster into the restaurant and tacked it up when no one was looking. Maravilla was wearing his McDonald's shirt to blend in.

Maravilla told Ellen his mom got a kick out of it when he confessed.

"When I told her about it, when the poster came to my house, she couldn't help but laugh with my dad," he said.

After the poster stayed up unnoticed for more than a month, Maravilla tweeted about the prank and it quickly went viral.

McDonald’s was a good sport and applauded the UH students for creativity.

They recently took the posted down because that McDonald's is being remodeled. But they announced Monday it will be donated to the Ronald McDonald House for a fundraiser.

The gift that keeps on giving.