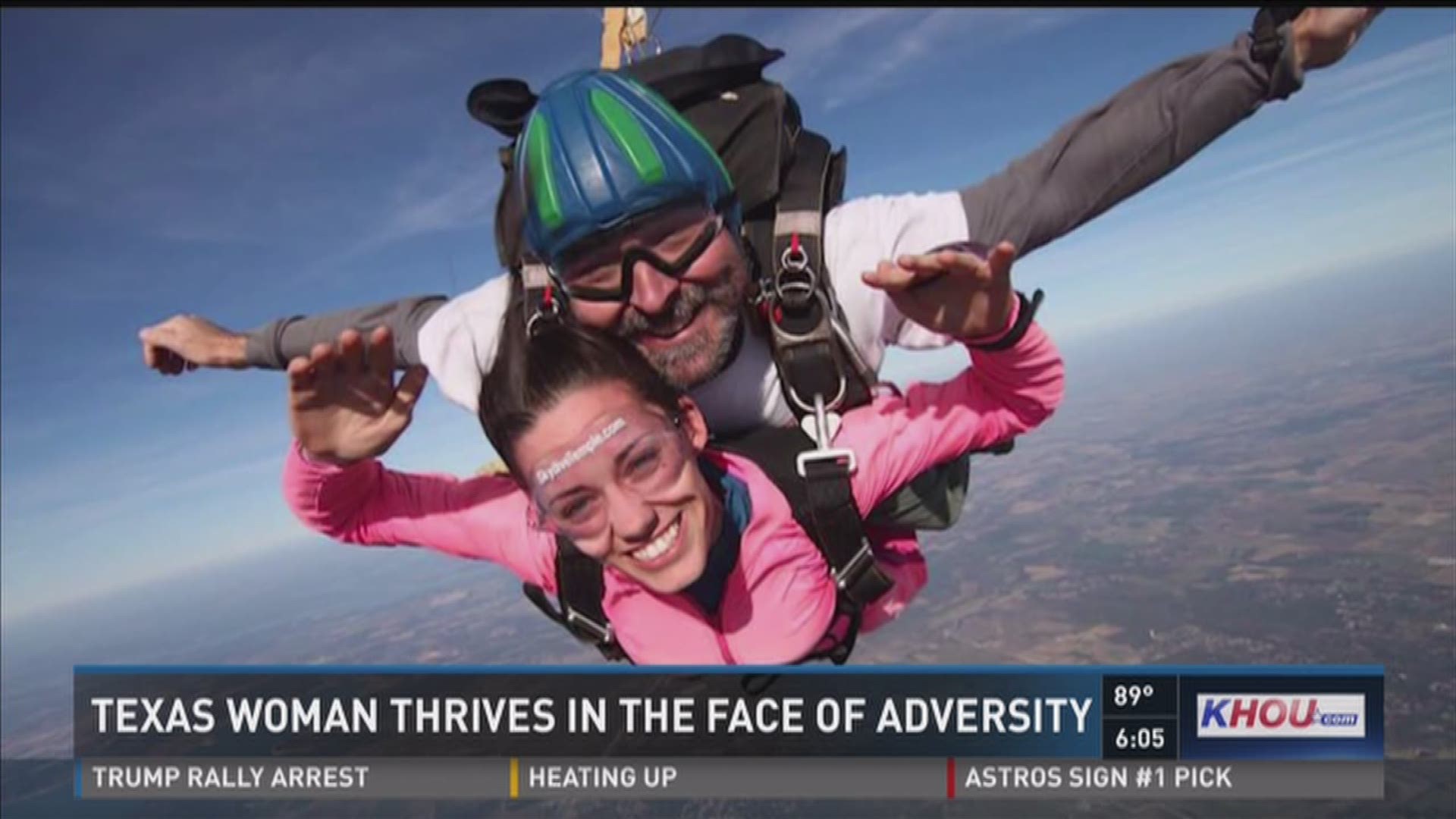 ROSHARON, Texas - When Caitlin Conner jumped out of a perfectly good airplane last weekend at Skydive Spaceland, she was celebrating an anniversary of sorts.

She calls it an ampu-versary: the two year mark of a horrible accident and the beginning of a long purposeful march to reclaim her life.

It was 2014, she was a newlywed, just two months into their marriage.

She and her husband, Jaylon, were traveling on his motorcycle near Fort Worth, a one mile trip to meet his mom who was recovering from her first chemotherapy treatment for stage 4 cancer.

It was already going to be a trying day, but then a car came barreling toward them. The investigation later discovered it was a teenager texting and driving.

"We got away,” Caitlin said. “We got into that right lane as far as we could and she just kept coming."

The impact threw both Caitlin and her husband from the motorcycle. He landed 50 feet way with a shattered pelvis and a broken femur.

Caitlin called for help and Jaylon, unable to walk, crawled to her side.

"It was a lot to have to look down and see a battered body. Your face is all swollen and you can't see out of an eye." Caitlin said.

Jaylon and Caitlin Conner in the hospital after the accident.

But the worst was a nearly severed left foot, one that would be difficult if not impossible for doctors to save.

When she woke up in the hospital, Caitlin made the decision for them, when doctors told her one more thing: she was also four weeks pregnant.

“I didn’t have time to worry about how I felt. I needed to focus on her,” she said.

She opted to have the leg amputated below the knee and also backed off on pain medications when she was released from the hospital to focus on a safe pregnancy.

She’s an admitted country bumpkin from Chappell Hill out to prove that life goes on.

"We've got God to thank. You know we've survived this. We're here for a reason. Wouldn't put us through anything we couldn't handle. I think it has a lot to do with going through a lot of loss at once, and realizing you still live. You still survive." she said.

And with her now 16-month-old daughter in tow, that survival includes trips to a Brenham gym, Red Hornet Crossfit, where sometimes she works on just her one leg to keep building strength, to keep coming back, to keep on living.

Caitlin Conner with her daughter, Tinley.&nbsp;

As for why she chanced skydiving, she had done it twice before the accident, but she needed to go back and prove to herself there are no limits.

"It's the most beautiful view of the world. How many times can you say you've touched the clouds? I can say I've touched them three times.” she said.

The jump at Skydive Spaceland in Rosharon was about reclaiming the life someone else nearly took.

"It was liberating to know that I can do something somebody doesn't think I can do. It didn't stop me. Now I know I can do it. It's not gonna stop me. I'm gonna continue to do it and continue to do things that scare me. And that fear will be gone." Caitlin said.

"When you've had a chance to lose your life, you start to respect all the aspects of your life, even the bad stuff." she added.

The bad stuff, included the recent deaths of a brother, her step dad, and her mother-in-law to cancer last June.

So a 26-year-old already overloaded with life lessons, doesn't try to hide her scars.

"We all go through trials in life. We all overcome them. I understand that I can overcome them. And that it just defines me and gives me character. And I'm OK with that. My scars make me who I am,” she said with a smile.

Scars that remind her, there isn't a minute to waste. So a bicycle, horseback riding, maybe even a triathlon could be next.

"The only thing stopping you from succeeding in life is yourself. As soon as they open up their mind and try something, they're gonna flourish, in everything that they do. Even doing the dishes. They're gonna be spotless!” she laughed.

So this young mom, an amputee and a fighter with a remarkable outlook on her difficult life will keep pushing, keep jumping, keep touching those clouds.

"I'm gonna do it again,” she said from her Chappell Hill backyard while staring up at the billowing white clouds of a sultry June afternoon. “Love to get back up there and touch 'em."