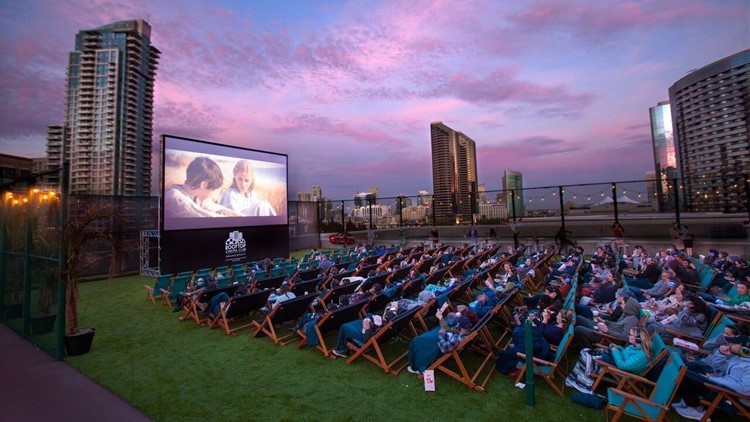 HOUSTON — Rooftop Cinema Club in Houston is back for its 2020 season beginning March 18.

To kick things off, tickets for March through May are already on sale.

For the first time, fans will be able to plan their outdoor cinema experience up to three months in advance with films scheduled seasonally versus monthly.

The kings of the sky-high cinema open up Wednesday, March 18, at the height of rodeo season with the John Travolta and Debra Winger classic, “Urban Cowboy.”

In March, in an ode to master filmmaker, Quentin Tarantino, Rooftop Cinema Club will celebrate his catalog of work on his birthday, March 27 where one of his cult classic films voted on by fans will be screened. Fans can vote online via the film screening page.

The winning film will be announced on March 2. In Rooftop fashion, guests are encouraged to dress up as their favorite Tarantino character.

In addition to these nights, other highlights in March include a special 63rd birthday celebration of Oscar winner Spike Lee, with the screening of “Do the Right Thing” on March 20 (his actual birthday). The next night, March 21, Rooftop celebrates World Poetry Day with a screening of “Poetic Justice.”

“We’re excited for another great season of our one-of-a-kind cinema experience in Houston,” says Rooftop Cinema Club founder Gerry Cottle. “This season we wanted to give our fans the ability to plan their visit well in advance and have the best chance to catch their favorite flicks or attend one of our special events.”

April’s Thursday themed night will be dedicated to the queen of Tejano with April 16’s screening of “Selena.” She would’ve turned 49.

On May 1, Rooftop celebrates one of its favorites when “Love & Basketball” turns 20.

In memory of Gianna and Kobe Bryant’s passing, Rooftop Cinema Club will donate a portion of proceeds from this anniversary screening to his Mamba Sports Foundation to help them carry on the legacy of providing underserved communities and individuals with diverse sports opportunities.

Also in May, Prom Night comes to the rooftop with the May 2 screening of “American Pie.”

Before the show, the rooftop will be blasting 90s and have a prom-style photo moment for fans to capture all of the night's memories. Dressing up is not required, but prom attire is highly welcomed and encouraged.

Other notable screenings in May include the Cinco de Mayo showing of “Pan’s Labyrinth,” “Back to the Future” on May 6; “Steel Magnolias” on May 10 for Mother’s Day, and more.

Tickets start at $17 per person for a one-person lounge seat. The same single person seat with the addition of bottomless popcorn is $20.

Tickets for couples, or anyone looking for a roomier love seat, plus bottomless popcorn, are $24 per person.

Student discounts are also available starting at $15.30 per ticket, with valid I.D. required the night of the event.

Rooftop Cinema Club is permanently located within the BLVD Place shopping complex, directly above Whole Foods, at the intersection of Post Oak Boulveard and San Felipe in the Uptown District – 1700 Post Oak Blvd.

Guests should use the BLVD Place parking garage and park on, or near, the fifth floor where they’ll also find Rooftop Cinema Club’s entrance.