Is it real? Is it fake? The rodeo released a brief statement about the apparent leak, which has some impressive names along with a few surprises. 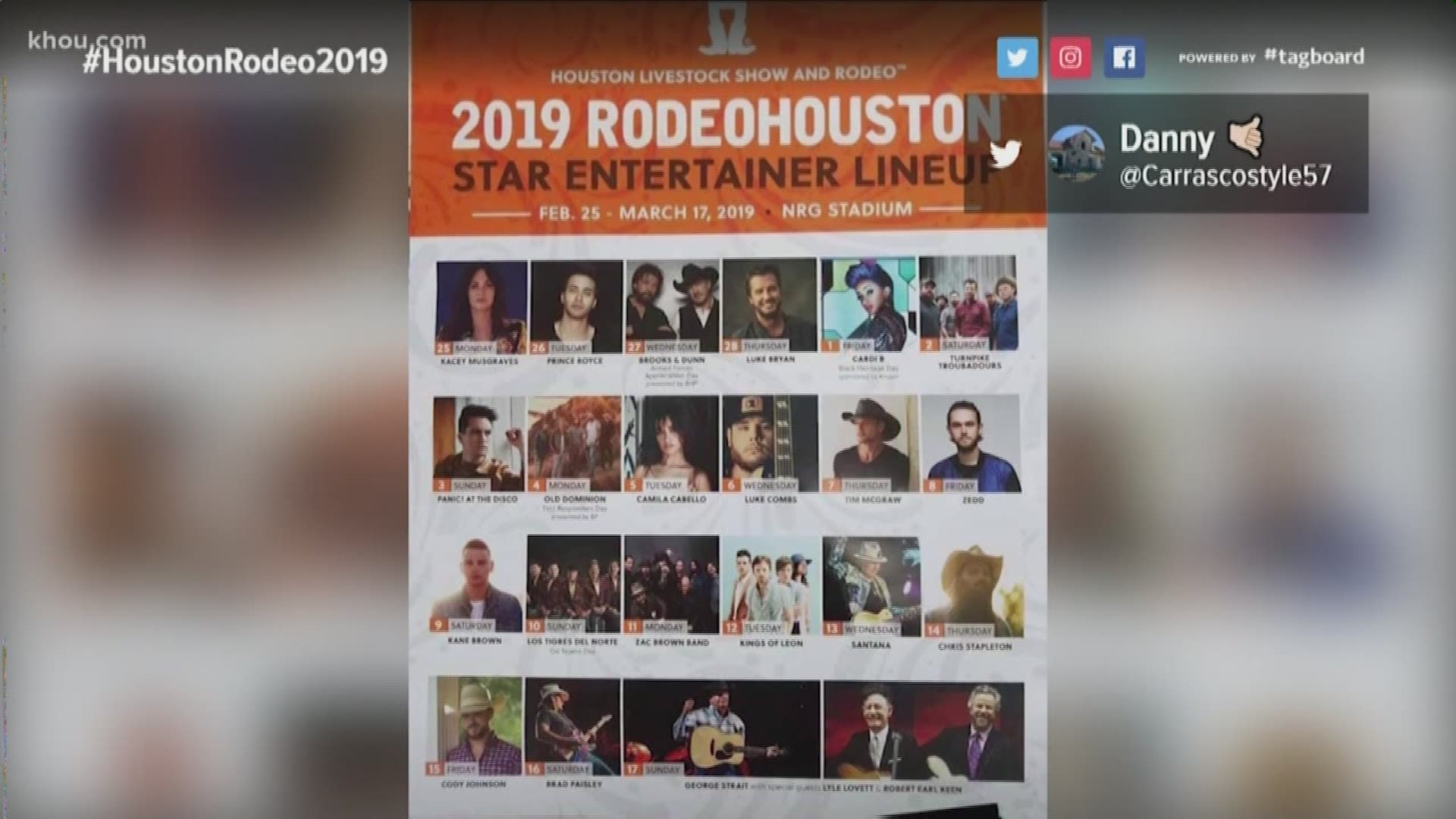 HOUSTON - The New Year brings new excitement to Houston. It means a new start, new resolutions, and as always, the announcement of a the Houston Livestock Show and Rodeo Concert Lineup.

The 2019 rodeo concert lineup was leaked Thursday -- we think. So KHOU 11 News wanted to verify: is it the real rodeo lineup?

The leaked calendar of entertainers, which surfaced on Twitter Thursday night, indeed has some impressive names along with a few surprises, including Cardi B, who is rumored to perform March 1, 2019.

Others on the lineup include Kacey Musgraves, Panic! At the Disco, Luke Bryan, Chris Stapleton. And some old favorites are rumored to be making a return to the rodeo, including Brooks & Dunn and Tim McGraw.

We matched the leaked lineup to the music genres released by the rodeo earlier this month, and the genre for each date does seem to match with each posted performer.

Next, we reviewed the bands and the current tour dates they have posted. Each and every one of them suspiciously have those dates currently open which means they are available to perform for a prior commitment if the lineup isn’t lying.

On top of that, some seem to have performances in nearby cities around the same days they’re scheduled to perform here.

We called staff members with RodeoHouston who continue to say the official reveal of the lineup isn’t coming out until Jan. 3, 2019, and referred us to a tweet they sent out Friday:

"Hmmmm, that’s a mighty impressive lineup. 👀 But is it the real lineup? We’ll have to wait until the Jan. 3 reveal to see! #RODEOHOUSTON"

Hmmmm, that’s a mighty impressive lineup. 👀 But is it the real lineup? We’ll have to wait until the Jan. 3 reveal to see! #RODEOHOUSTON

Ashley M. appears to be excited about the list. She writes, "No way this is accurate. But if it is. Decisions decisions."

Others say they are waiting for proof that it's real before getting excited. "It’s fake y’all. Had us all excited, but they don’t release line up til January 3rd," tweeted @honeybfly81.

Others claim it has to be fake because if Brooks & Dunn were to appear together at the rodeo again, they'd have to be opening or closing the rodeo. The duo went separate ways after their last tour in 2010 and haven't appeared in Houston together since.

What we can verify while it doesn’t seem too good to be true, we will have to wait another week to find out for sure. What we do know to be true is with George Strait already on the calendar, this year’s rodeo will be one you won’t want to miss.