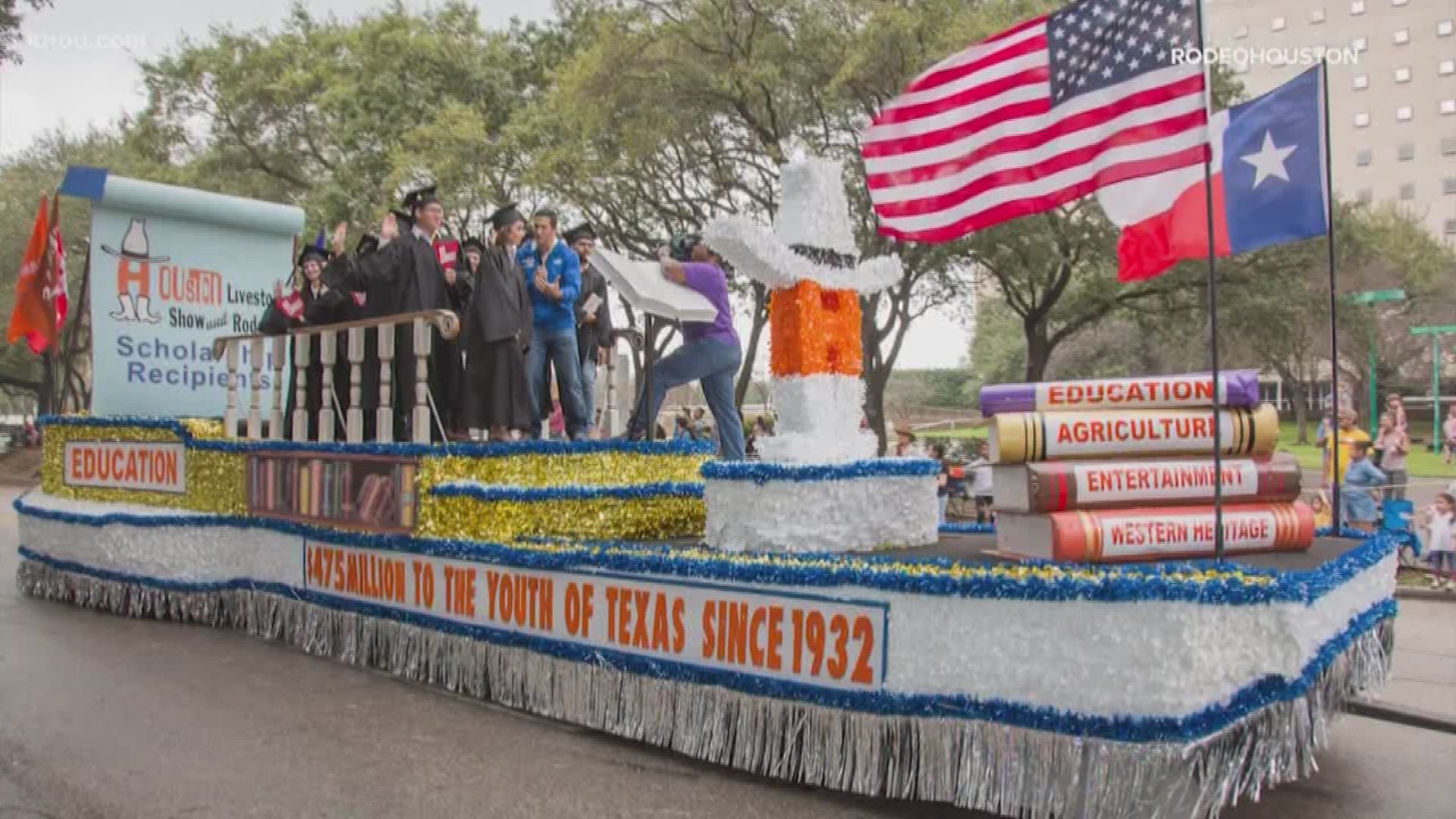 HOUSTON — The Houston Livestock Show and Rodeo will highlight its commitment to youth and education during the 2020 Rodeo Parade.

The grand marshals will be past and present recipients of Rodeo scholarships dating back more than six decades.

“We reached an extraordinary milestone in 2019 when we officially surpassed $500 million in our total commitment to youth and education since 1932,” said Joel Cowley, Rodeo president and CEO. “To celebrate our 19,000 scholarship recipients, a Rodeo scholar representing each decade will serve as grand marshal, including our very first scholarship recipient from 1957.”

The Rodeo previously announced former Houston Dash Captain Kealia Ohai as grand marshal of the 2020 parade. In early January, it was announced that Ohai was acquired by the Chicago Red Stars.

“We were excited to have Kealia lead our 2020 Downtown Rodeo Parade and appreciated her willingness to be a part of our annual tradition,” Cowley said. “Kealia has made a tremendous contribution to the Houston community, and we hope she can be involved in the Rodeo in the future. We wish her all the best in Chicago with her new team — she will certainly be missed in Houston.”

Meet the grand marshals of the 2020 Rodeo Parade

Ben Dickerson: 1957 scholar, FFA Scholarship
Dickerson was the first Houston Livestock Show and Rodeo scholarship recipient in 1957. He received his bachelor’s degree from Texas A&M University and his doctorate from Louisiana State University. He is a retired U.S. Army Colonel and currently serves as director of Clinical Operations for Ranch Hand Rescue Human and Animal Sanctuary. Dickerson also serves as a member of the Texas Joint Legislative Committee on Aging.

Bill Sarpalius: 1969 scholar, FFA Scholarship
Sarpalius attended Texas Tech University where he received his bachelor’s degree in agribusiness and was later named a distinguished alumnus. He was elected to the Texas Senate in 1980 and served for eight years. In 1989, Sarpalius was elected to the U.S. Congress, where he served as a member of the Agricultural Committee. Currently, he’s a motivational speaker and CEO of Advantage Associates International and also serves as chair of the Rodeo’s Alumni Association.

Dr. Gregg Knape: 1972, FFA Scholarship
Dr. Knape’s love for animals led him to Texas A&M University where he graduated in 1976 with a degree in veterinary medicine specializing in farm animals. He opened his own practice in 1983, serving as veterinarian at Gulf Coast Large Animal Clinic. Dr. Knape also serves as the official RODEOHOUSTON® veterinarian, ensuring that all of the livestock athletes receive the best care.

Ryan Levy: 1993, Metropolitan Scholarship
Levy is a winemaker, chef, and certified sommelier who trained in France at Le Cordon Bleu, in California with master sommeliers and star winemakers in Napa, and began creating his first wines in 2007 under his label, Nice. In 2017, his wine was awarded Reserve Grand Champion Best of Show in the Rodeo’s International Wine Competition and was sold at auction for $140,000. He received his bachelor’s degree from Rice University and his doctorate degree from The University of Texas at Austin School of Law.

Sarah Brubaker: 2006, Opportunity Scholarship
Brubaker studied aerospace engineering at The University of Texas and now works at NASA, a lifelong dream. At NASA, she serves as ISS Commercial Crew Integration Engineer, working on the team that manages transportation to and from the International Space Station. She received her bachelor’s degree in aerospace engineering from The University of Texas at Austin.

Yuselmy Garza: 2010, Metropolitan Scholarship & 2013 Achievement Scholarship
Garza currently serves as a project manager at Memorial Hermann Hospital. She is also actively involved as a Rodeo volunteer, serving as assistant captain of the Gatekeepers Committee and the Rodeo’s Scholarship Alumni Task Force. Garza received her bachelor’s degree in business administration and management from the University of Houston and is currently pursuing a master’s degree in business administration from the University of Houston-Downtown Marilyn Davies College of Business.

Jordan Pemberton: 2019, Houston Area Scholarship
Pemberton attended Houston’s Yates High School and is a health major at the University of Houston. He is involved in the Honors Scholar Program and the Black Student Health Association.

Tap here to learn more about how to apply for a rodeo scholarship.

The parade route begins at Bagby and Walker streets, travels from Travis to Bell, and from Bell to Louisiana, before turning on Lamar and ending at Lamar and Bagby streets.

Prior to the start of the parade will be the 2020 Rodeo Run, presented by ConocoPhillips. The Rodeo Run will include a wheelchair race, 10k race and a 5k fun run/walk.