The No. 1-ranked restaurant in America is right here in the Houston area. 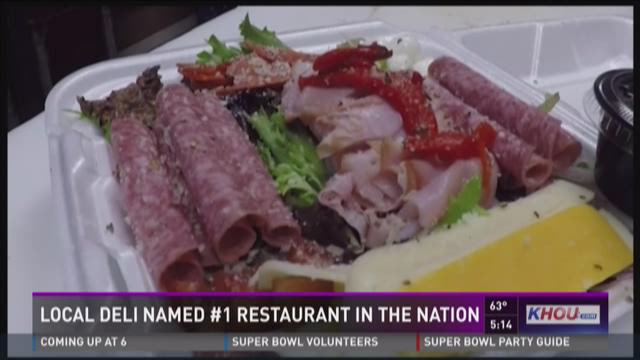 MONTGOMERY, Texas -- The No. 1-ranked restaurant in America is right here in the Houston area.

That is according to Yelp reviewers, who gave Tony’s Italian Delicatessen in Montgomery the top marks.

Monday, Yelp’s Shannon Eis flew in from San Francisco to surprise owners Mary and Hootie Trant with the good news.

Yelp is using a new algorithm which gives small and new business like this 2.5-year-old sandwich shop a fighting chance with big established names.

“More than just the number of reviews that would always be looking at older businesses, this year we also looked at quality (relative to quantity)," Els said. "That balanced the scales a little more.”

In fact, nearly 75 percent of the top 100 eateries are smaller, simpler places. Many offer items for $10 or less.

Owner Hootie Trant share the not-so-secret ingredients to their success.

“One: love. Two: the ingredients," Trant said. "We use top-notch stuff. We don’t use any junk.”

Customers have agreed for awhile. Tony’s, on 16283 FM 105 West (across from April Sound), began as a takeout place with just one table. They expanded once and will knock out a wall to add another 32 tables this spring.

The Yelp recognition left Mary Trant misty eyed, saying, “It was truly an emotional moment for us.”

The deli likes to have fun with its menu. The sandwiches have personalities, like the stars for whom they are named. Hootie Trant points to the Travolta, saying, “Like the man. Don’t’ know which way he’s going to go. Half egg, half tuna.”

The couple spend 16 or 17 hours a day here, more time than they spend at home. They are overcome.

“All we do are sandwiches," Mary Trant said. "It’s not like we serve a five-course meal. We make subs, salads, sandwiches. What an honor.”